fruits of the land

After our friend Jan thought at the weekend that the large patch of ground near the lawn was our potato patch. In fact it is a load of nettles - it was finally time to act!


We had sown a box of 'red flowers' on the bare earth in May, but a combination of chickens and stony ground left no trace of them. The nettles however, thrived as ever.
So we decided to dig up those nettles and make a formal bed. An afternoon's work perhaps - think again
Firstly, the nettles have been there for about 20 years, and were not giving up easily.
Secondly this is the tip of an enormous pile of stones, left when the threshing barn was bulldozed, before our time.
This made for a stubborn combination, requiring much brute force, using the stone spike (a long very heavy iron pole used for levering out the stones - many thanks to Frank for the lend of it!) leaving aching muscles and a distinct 'going off gardening' moment.
That was yesterday, after a glass of wine and a nights sleep, the more positive aspects appeared: they are lovely stones, and make a perfect edge.

At garden centre prices we've earned ourselves about £200!
Based on that bit of false accounting, we went off plant shopping! 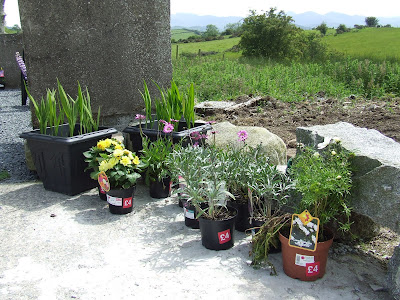 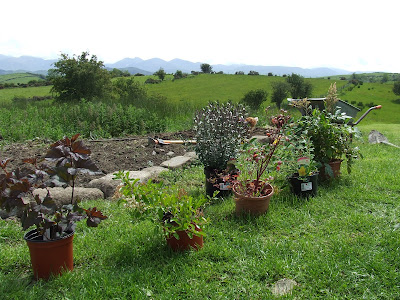 and planted of our own:

By the end of day two we were done, all the plant we put in are perennials and shrubs, so every year they will (hopefully) give us increasing displays.

Posted by Clonachullion at 5:33 pm No comments: