As I sit watching and listening to the wind and the rain outside ( not really wanting to get started out there this morning!) I looked at the blog for this day last year: 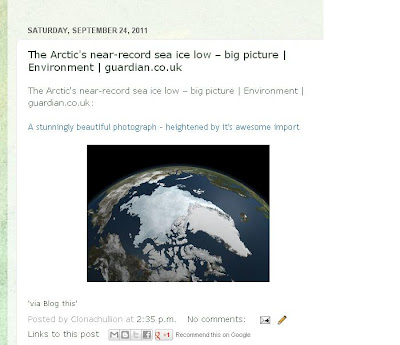 This is the picture in large format

So I looked at the Nasa site:

and the latest map:

As the US NSICD director said:


“We are now in uncharted territory,” said NSIDC Director Mark Serreze. “While we’ve long known that as the planet warms up, changes would be seen first and be most pronounced in the Arctic, few of us were prepared for how rapidly the changes would actually occur.”

And today's headlines only seem to bear this out:

Three die as warnings issued of fiercer winds and the chance of flooding in 88 areas of the south-west, midlands and north-east
http://www.guardian.co.uk/uk/2012/sep/24/wet-weather-sweeps-across-uk
'Planetary emergency' due to Arctic melt, experts warn
http://www.google.com/hostednews/afp/article/ALeqM5jKKr0IRUKbR6Se7mFZu_qfcFWZTw

Posted by Clonachullion at 12:15 pm 2 comments: